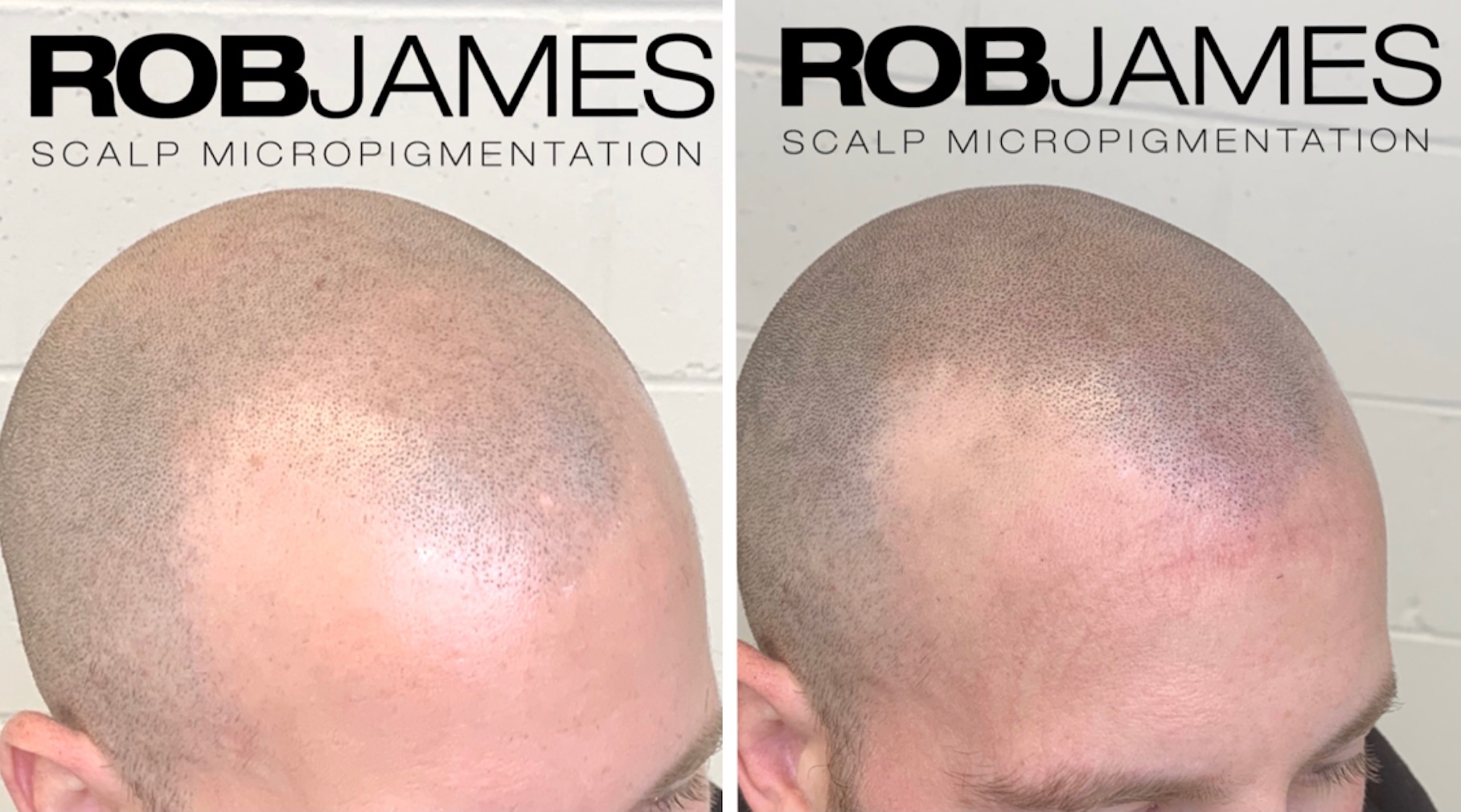 How to get natural SMP results in Vancouver

Whether you’re looking for a completely new hairline or looking to add density to a thinning scalp, many people want something that does not look like they’ve had SMP. In other words, a natural looking head of short hair. But how do you know that is what you’re going to get?

Many people seek me out as an artist because this is pretty much all I do (natural looking scalp micropigmentation) If someone wants super sharp, super straight lines, I generally send them somewhere else because I’m sure there’s many artists who do that better than me. The beauty of SMP is that (if done properly) it can be catered to your wants, needs and style.

In my opinion natural means, unobtrusive, subtle and inconspicuous an addition to your existing hairline and scalp density that does not draw unnecessary attention. A natural looking SMP should blend seamlessly into your surrounding hair. Has a shape that is complimentary to your face and a tone that does not look out of place. Natural also means something that is appropriate for your age and stage in life, as well as something that will stay relevant as you mature.

#1 Design: Most of the time a natural hairline is never perfectly symmetrical and it is not made up of sharp right angles. The face should not be narrowly framed by a razor sharp box and the hairline should not be too low on the forehead. This will result in a narrow, short forehead and a look that just isn’t natural. A natural design can be straight and it can be lower, but it does have to compliment your facial structure and resemble your pre existing hairline to a degree. I always like to see old photos of a client’s hairline and use that as a guideline. (As a sideline, we are all different and some individuals do possess a very straight hairline). 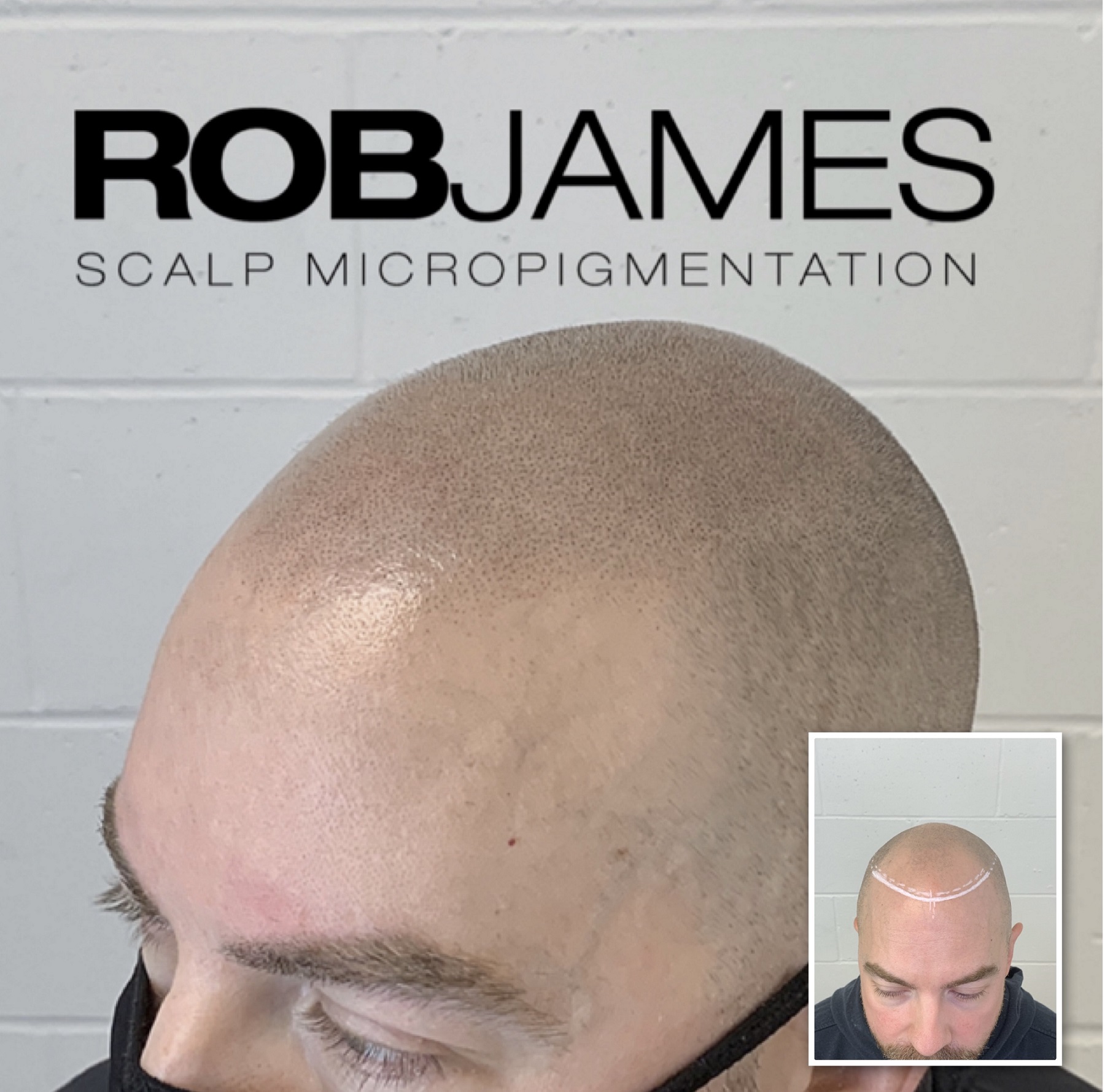 #2 Blending: A natural SMP should blend perfectly into your surrounding short hair, there should be no heavy defining line where natural hair meets two dimensional cosmetic tattoo (SMP hair). A straight line where your SMP starts and you natural hair ends will definitely draw attention, taking away from the natural look you desire. And experienced artist will know how to blend seamlessly. 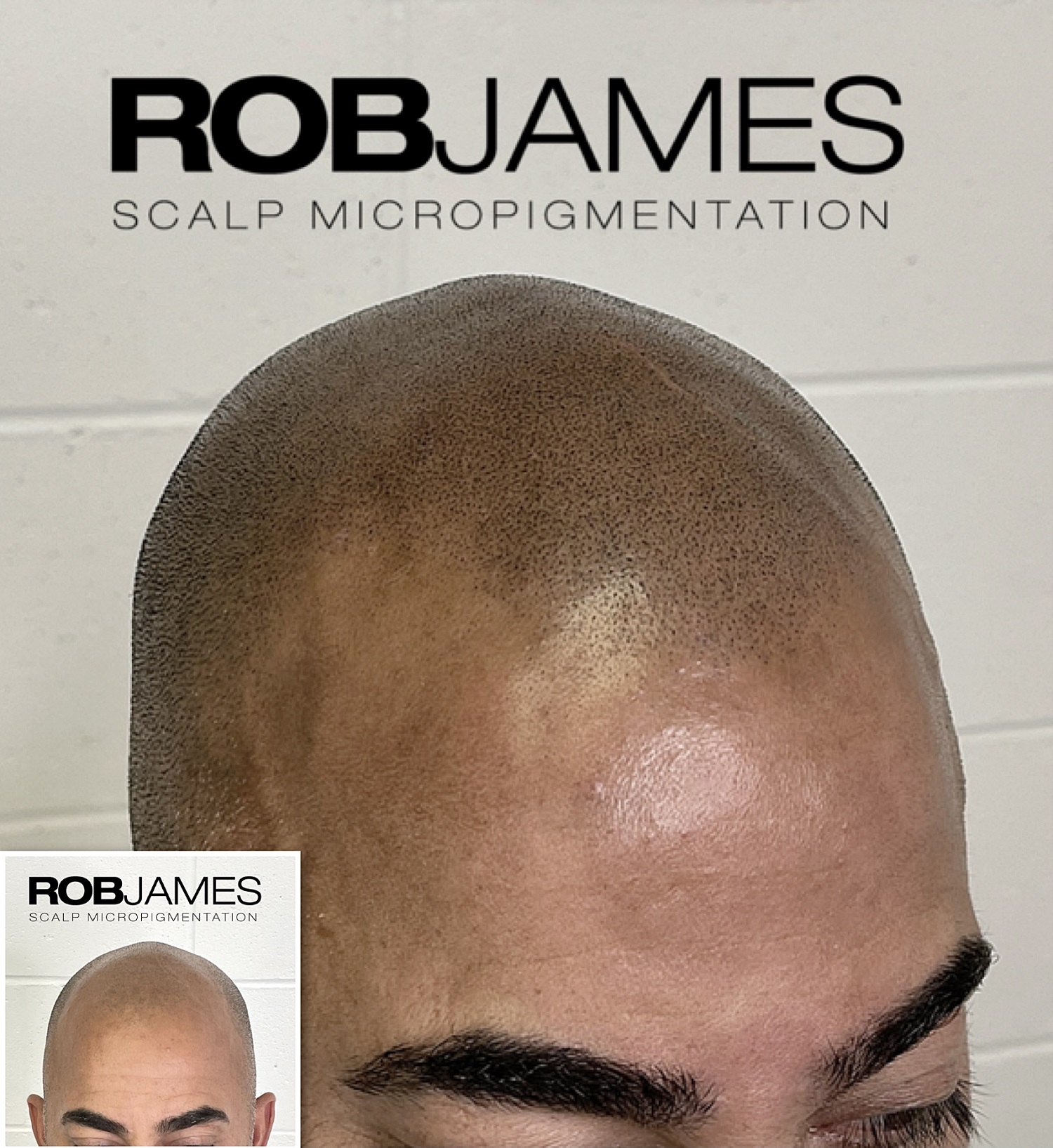 #3 Impressions: The individual SMP impressions should match your existing short hair width. I’ve seen so many SMP’s where the impressions are far too large in comparison to the surrounding natural hair. Often the contrast between SMP impressions and the client’s natural hair width is too evident and this does not allow for a convincing blend. This ultimately comes down to the artist’s cartridge selection and impression depth. 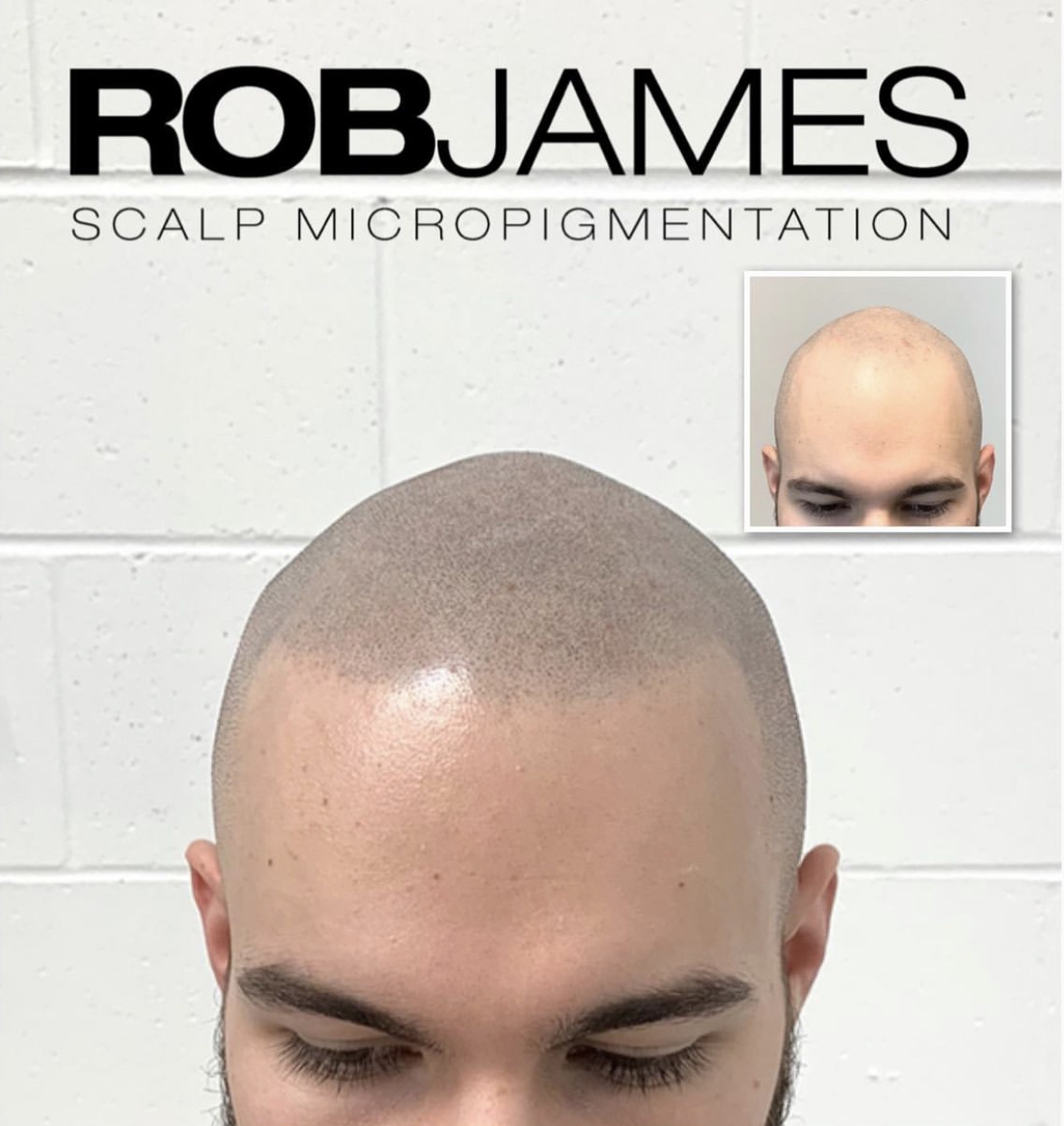 A natural looking SMP in Vancouver

#4 Tone: Using the correct pigment tone is of vital importance in achieving a natural looking SMP. Depending on my client’s skin tone and hair colour, I tend to select two tones to use throughout the process. I blend the sides into the existing short hair with an identical grey scale tone and for the top I use a tone just a tad darker than the existing hair. This will compensate for fading over time and will give a desirable fade appearance as the SMP transcends from slightly darker on top into perfectly blended sides. The hairline is also a shade lighter and less dense than the forelock and mid scalp, creating a natural feathered hairline. 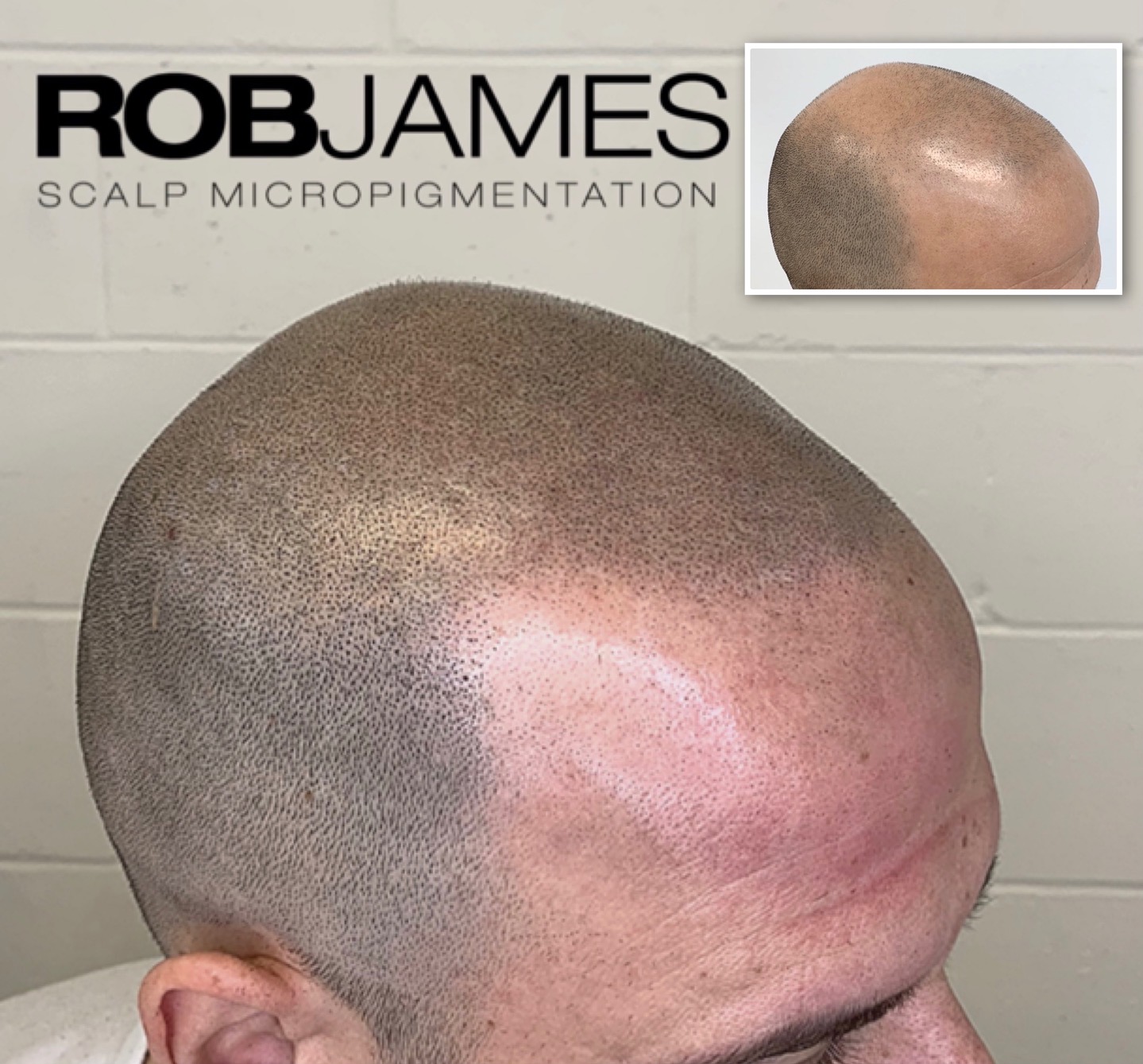 #5 Artist: SMP is an art, no two artists are alike, and everyone has their own style and skill level. Select your artist carefully, knowing what style you want will help you and the artist know if you’re a good fit for one another. Initially you can choose an artist via their body of work, does it resonate with you and your desired style? Then I advise meeting an artist in person, so that you can discuss your desired end result. If you’re looking for natural, choose an artist whose work consistently looks natural. Do not expect an artist to do something completely different looking from their existing body of work. Good communication is paramount, as you will both want to have a clear understanding of what you are hoping to achieve. 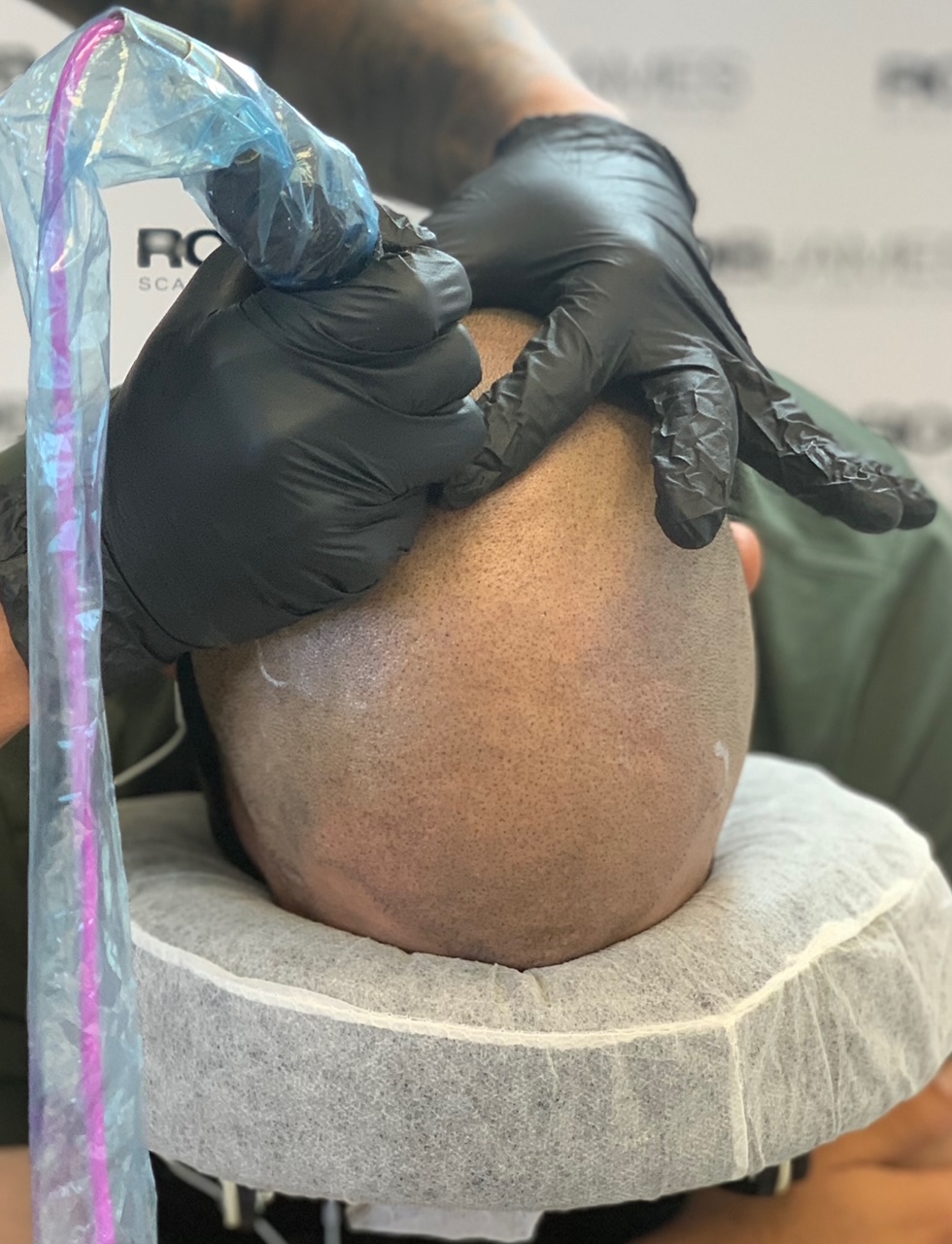 I tell all my clients, slow and steady wins the race when it comes to creating a great looking SMP. Do not rush and do not expect the finished result in a matter of hours. And if something sounds too good to be true, it usually is! Remember, this is your head, so do it once and do it right!

With well over one thousand SMP’s to his name, Rob James is one of Canada’s most requested SMP artists known for his ultra natural SMP results.

Yesterday a new client told me that he couldn’t find any information regarding what to expect after each SMP session.

He explained that he could find plenty of before and after photos of completed SMP procedures, but nothing regarding what results to expect after each session.

This got me thinking, and doing a little online research for myself. He was right, there is a lot of information and photos of before SMP and after SMP, but very little regarding what to expect after each SMP session. Understandably some clients are anxious about what the scalp micropigmentation will look like in between each session.

So I decided to write a blog post, which highlights, what to expect during and after each of the 3 SMP sessions from a typical full procedure.  And the subsequent touch up session two months later.

Highlighting what an individual might typically expect after each Session. And answering such questions like “Is there a difference between session one and session two? And how long will session three be in comparison to session one?

Please remember that this is based on the average. Some individual’s results do differ based on immune response, pigment retention and skin chemistry/condition.

Typically before we begin your SMP procedure, we will have already met, for a consultation either in person or via a video conference call.

We always begin with some formal paperwork (waiver)

Followed by a brief discussion regarding the procedure, this allows you to ask any lingering questions you may have forgotten to ask during the initial consultation.

When you feel comfortable to proceed we will typically go to the hair trimming station. This is where I like to trim the hair to what I feel is the optimal length for SMP (this is presuming you’re having a full SMP and not density work).

We then begin work on your hairline design. This is a very important aspect of the process and can often take some time. Careful attention is placed on appropriate placement and design. I personally like to emphasize, a less is more mindset, as we can always add more as the session’s progress, but we cannot take it away. 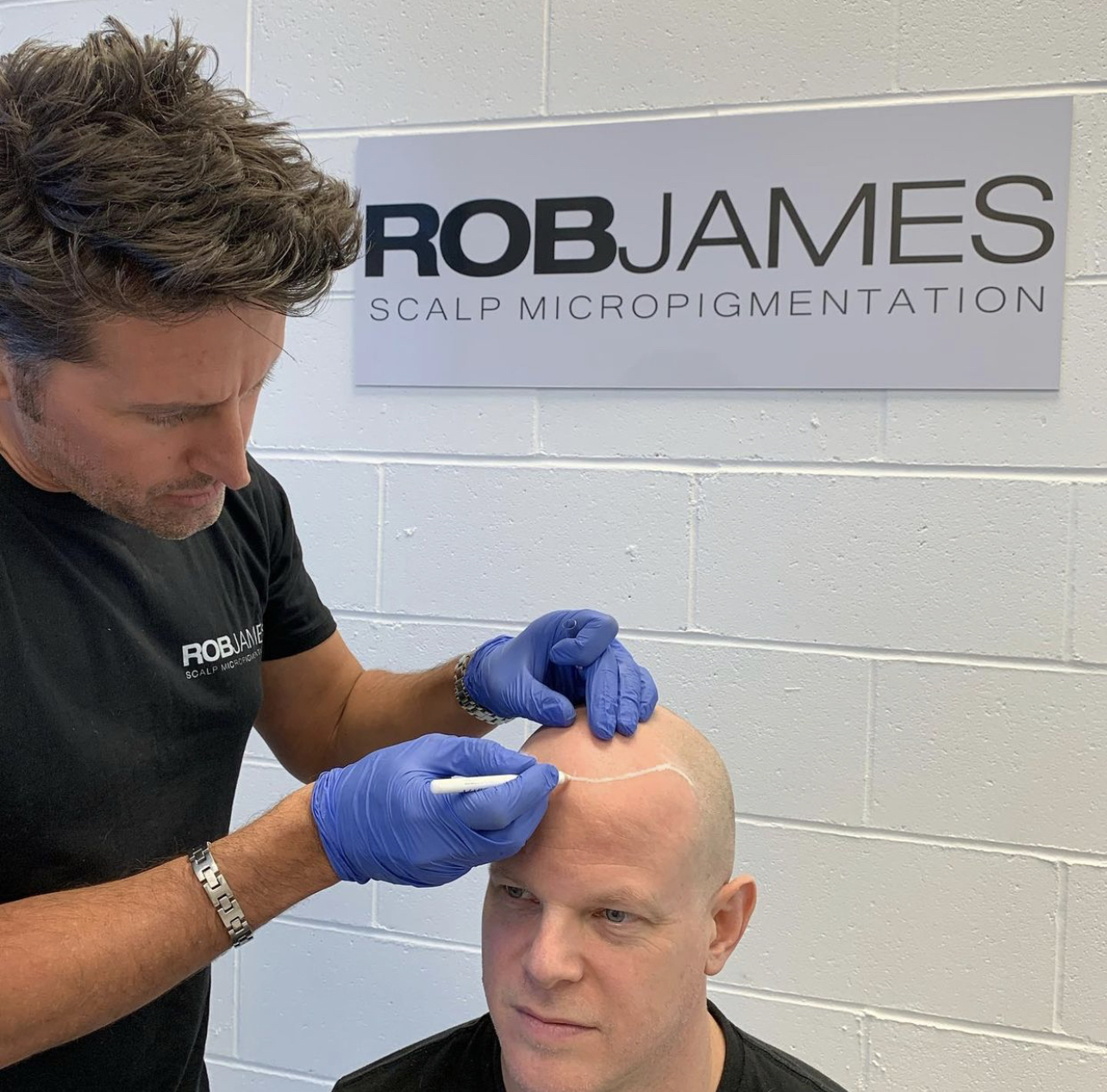 The scalp is thoroughly cleaned with alcohol before we begin the session.

Once we begin my clients are usually pleasantly surprised as to how painless the procedure is. However, if you do find any discomfort or sensitivity we can stop and apply numbing cream.

For a full SMP (usually two or three sessions plus touch up) you can expect to be at the studio for 3-4 hours.

All areas where we are adding microdots will be covered during each and every session. The typical dot ratio is about one dot every 1/8 to 1/16 of an inch.

Sometimes clients are a little disappointed after session one as there isn’t a significant amount to see just yet. Patience must be applied, as the best results come to those who allow the process to unfold gradually.

There maybe some redness of the scalp and this will subside within a few hours. A clean baseball cap may be worn after the session. 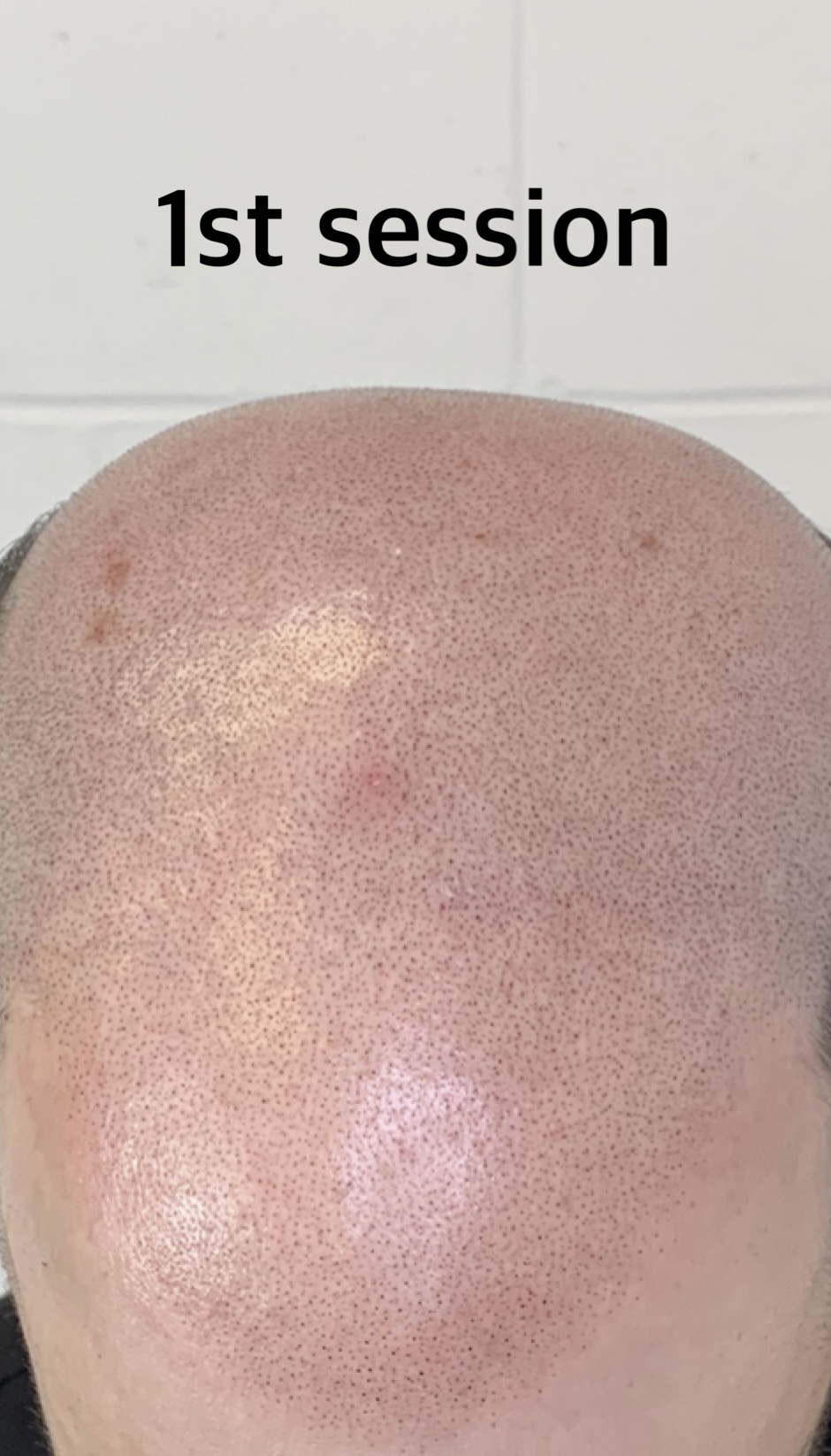 Once the session is completed, we will go over the aftercare and provide you with your aftercare instructions.

Session number two is typically 10-14 days after session one. Once you arrive we will take a look at the healed results and take note of any fading. We will then give the hair a trim and clean the scalp with alcohol. We can now discuss any changes that you would like to make with hairline symmetry. As mentioned more can be added, that is why I always encourage a conservative approach during the initial hairline design.

Session two will continue much like session one; all areas of the scalp receiving microdots will again be covered. We will be essentially doubling up on the density during session two. And beginning our layering process.

Same rules apply, if there is any sensitivity, numbing cream can be applied.

Once the session is over there will again be some redness that should subside within a few hours.

We will recap aftercare instructions just the same as after session one. 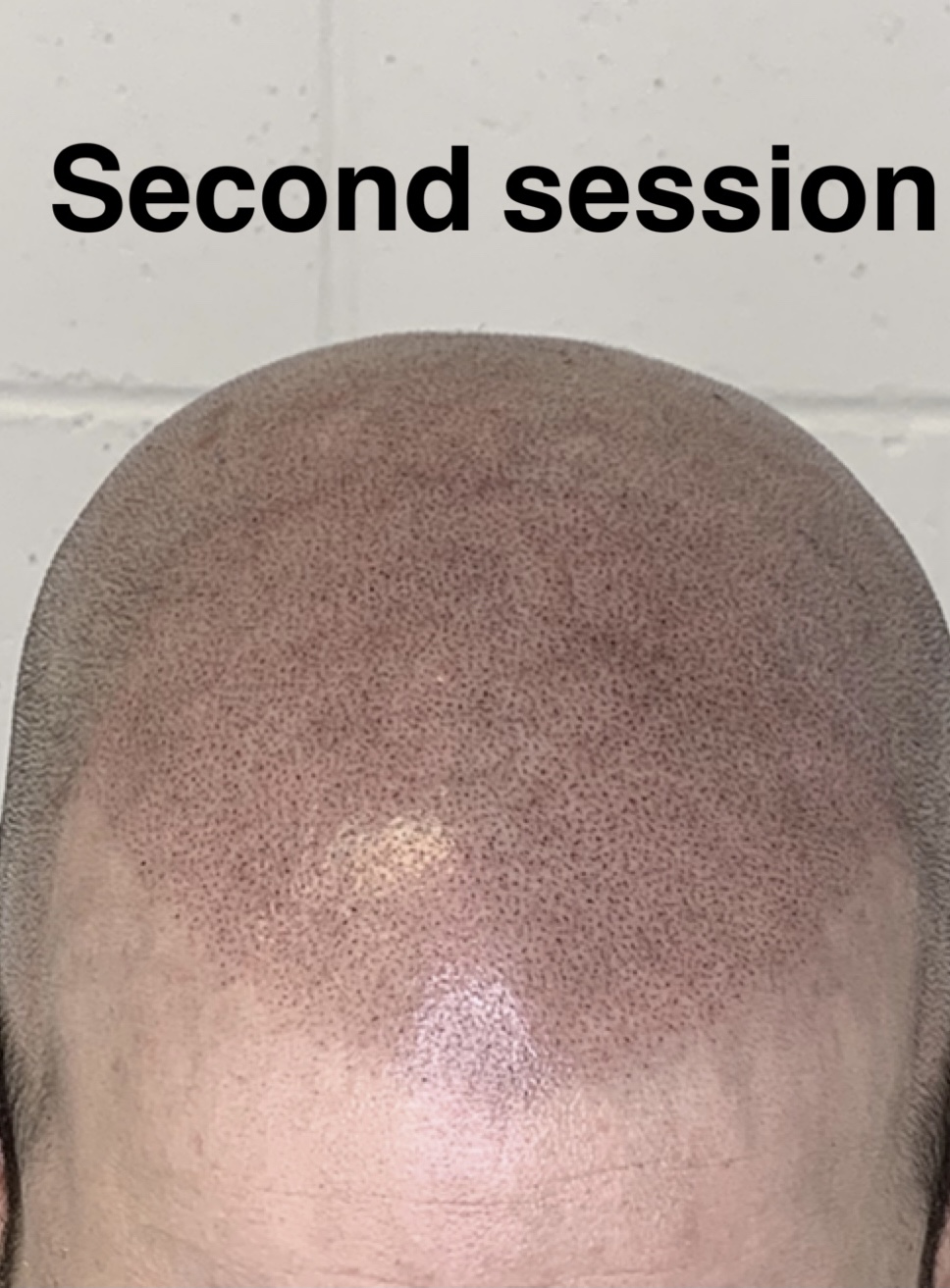 Session three is commonly our last session in the process. It is here that we add further layers and added dimension. We also feather out the hairline for that natural finish. The session can be the same duration as session one and two or it can be shorter depending on a client’s retention.

After session three, the same rules apply; there will be a slight redness, which will subside within hours. Aftercare rules also apply and again must be followed.

Once the ten days of aftercare is completed it’s life as normal with your new SMP.

There are some long-term aftercare rules, which we will also go over before you leave the clinic. 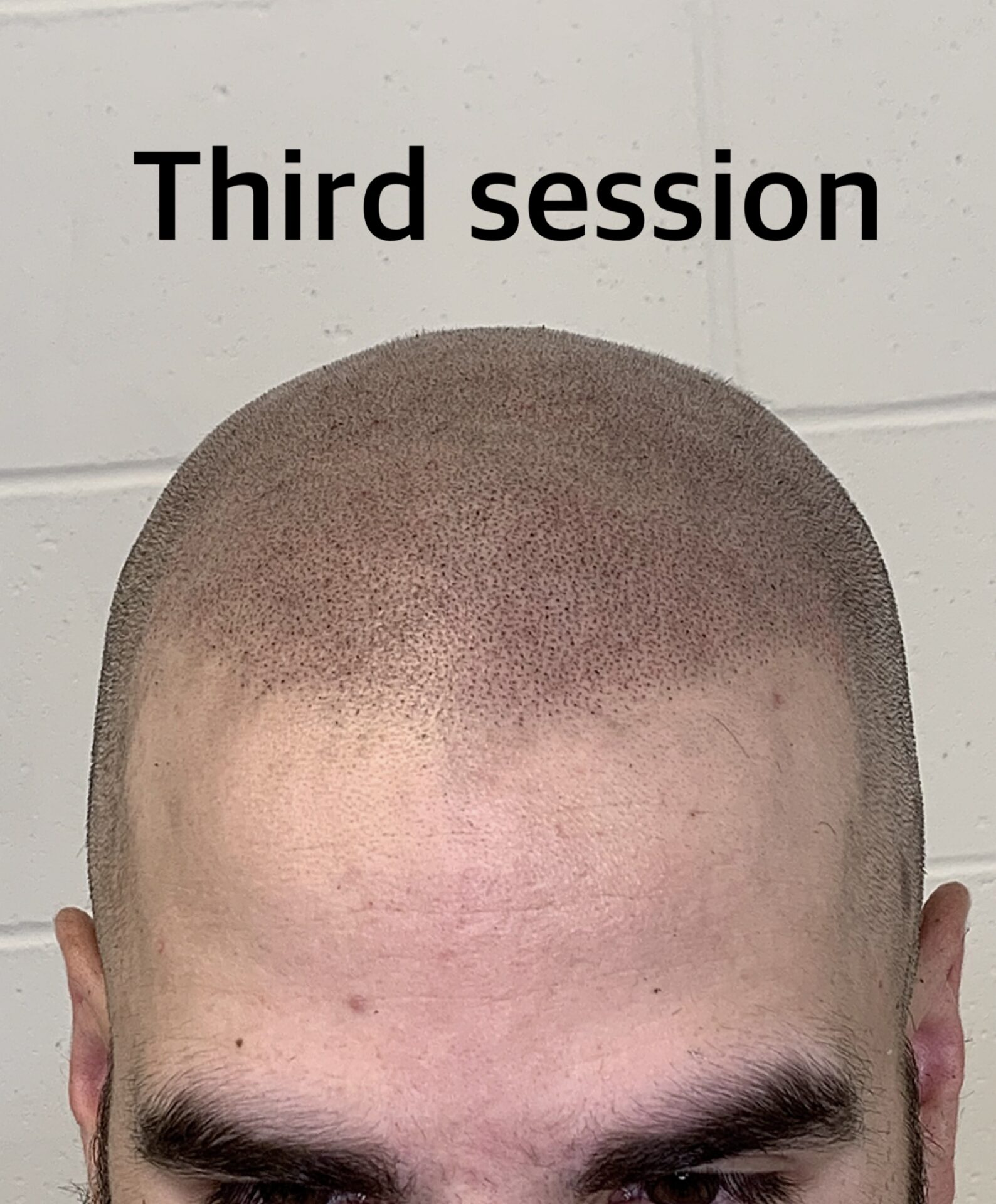 A touch up session is included and recommended two or three months after your SMP. As you get back to life as normal, there might be some slight fading in areas. The touch up fortifies any areas, which might need some added attention.

A touch up session typically lasts one to two hours.

Hope this blog post helps to outline what to typically expect on your SMP journey.

Rob James is based in Vancouver BC and is one of Canada’s most requested scalp micropigmentation artists, known primarily for his ultra natural hairline creations.